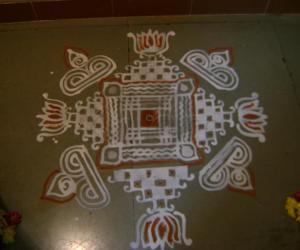 I finally remembered the name; its the Tower of Hanoi.
The arrangement of the nesting triangles on top of the stack of "wooden" pieces, reminded me of this game, but I couldn't remember the name of the game yesterday.
I like the inner basic design very much.

Actually this game originated in India. There are these priests in Benares whose job is to transfer 64 gold discs of graded weight and height from one tower to another via an intermediate tower. At no time the heavier disc can be placed on the lighter one. It is called Tower of Brahma (which later became the Tower of Hanoi). The number of moves is 2^n - 1 where n is the number of discs. If it takes one second for each move, to transfer 64 discs it will take 2^64 - 1 seconds
(nearly 590 billion years) which is more than the age of the universe (5 billion years). Actually, this site gives an interactive version of this game where one can change the number of discs. If you press the button solution, you'll see how the transfer is done. The url is http://www.mathsnet.net/puzzles/hanoi/index.html

Another nice one JKM...

The octagon shape given for the outer border gives a special look for this kolam.